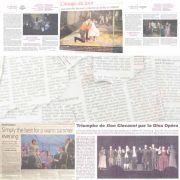 WHEN THE CHATEAU’S BARN BECAME SHAMELESS

The Barn at the Château du Saillant, which on the previous evening had hosted Die Entführung aus dem Serail, must have blushed more than once during the performance of Johann Strauss’s Die Fledermaus,as the libretto is based on the shameful immorality of the High Society at the end of the 19th century in Europe.  However, everything was perfectly decent since the company giving the performance was Diva Opera. 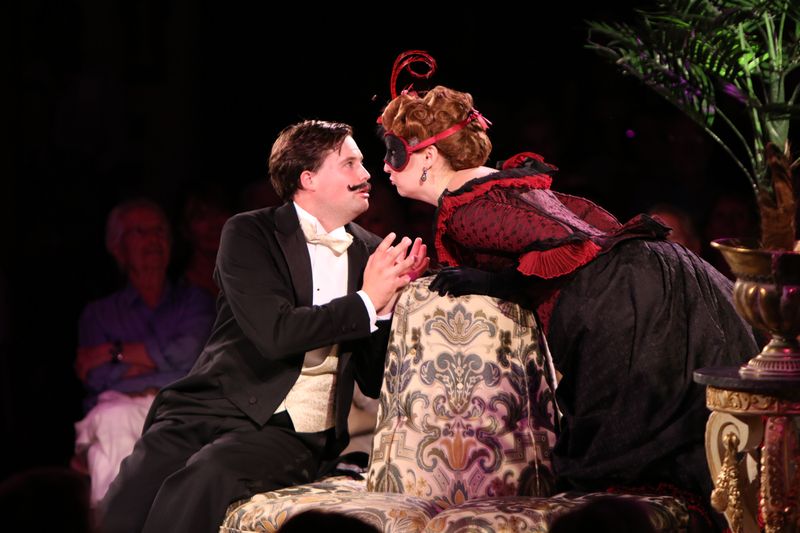 The director Cameron Menzies followed the libretto to the letter, knowing he could count on his cast’s infallible theatrical commitment to the work and also on the talent of Bryan Evans at the piano, the musical director of the operetta which will long be remembered at Le Saillant.

Eleven artists came together to present a masterpiece of a genre which is, alas, much neglected these days in French theatres. Even down to the slightest raising of an eyebrow, these singers are also first rate actors. The close proximity of the audience leaves no room for fault. In the role of Alfred, the unfortunate man who, because of his love for Rosalinde, ends up going to prison in place of her husband, Robyn Lyn Evans sings his heart out “adorning” his role with extracts from Turandot, Rigoletto, Traviataand other bits of Italian opera. His beautiful resonant tone immediately won over the audience. Soprano Sofia Troncoso amazed us as Adèle, with her excellent acting and voice without parallell, displaying a beautiful round and luminous soprano. Elizabeth Karani masters the role of the formidable Rosalinde to perfection, with a charming sound and a stunning Czardas. Adam Gilbert’s Gabriel is strong theatrically, hilarious as the bogus lawyer and a more than convincing tenor. The powerful and ultra resonant baritone of Timothy Nelson made light work of the role of Falke. This singer is destined for bigger roles… Martin Lamb played Frank straight-forwardly and with much experience. Louise Mott slips without difficulty into the role of Prince Orlofsky. The enraged Matthew Hargreaves (Osmin the previous night) drops his oriental costume and dons with aplomb that of the drunken prison warden Frosch.

There were numerous curtain calls for this high class performance, reminding us of the professionalism of this company and prooving that one does not need stratospheric budgets to bring opera to the heart of the masses.

A DIFFICULT OPERA TO SING, YET….

Diva Opera, the foremost English chamber opera group which comes regularly to the Vézère Festival, is quite undaunted by any challenge. To start an eagerly awaited lyrical weekend, this year it offered us no less than Mozart. And not just any Mozart! It was the big brother of the Magic Flute: Die Entfurhung aus dem Serail.

It is a singspiel, that is to say a comic opera with spoken dialogue. History will tell you that this opera was the foundation of all German opera. Equally it is the big brother to the Masonic Magic Flute, for Mozart had met the masons in London while composing this opera. He went back to Masonic themes two years later but here nods towards them by including an Englishwoman in his libretto. On a more serious note, this opera is filled with fundamental themes which are found in all his works: the brotherhood of man, the forgiveness of sins, clemency versus vengeance, faithfulness, the unity of a couple, the privileged role of the women who – in all of Mozart’s dramas – allows man to elevate himself, and finally the thought of death which liberates one from all passions. Despite the age of the composer – 26 years old – the Entfurhungis a work of great maturity. A masterpiece already. 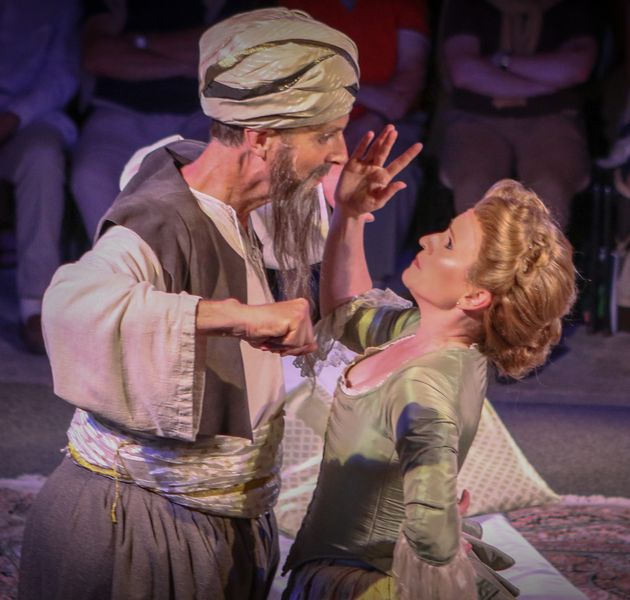 This comedy is therefore to be taken seriously, especially as the vocal demands of Mozart are not minimal. Two roles are particularly perilous, those of Constance and Blonde. To be saluted is the British soprano Gabriella Cassidy for her interpretation both vocally and dramatically in the role of Constance. Her voice is homogeneous and smooth, well projected in all the registers and faultless in the coloratura passages to a top D and added to her engaging acting throughout she renders a very exciting portrayal of her role. The Canadian Barbara Cole Walton is equal to her in the role of Blonde. Bubbly on demand, she leaves poor Osmin with no chance, assailing him with a bold aria, dizzying in its precision, all the way to a high E. Her pretty, fruity timbre and perfect roundness of sound add to the pleasure of listening to this artist. While not quite up to these heights the rest of the cast comes pretty close. Such is the role of Osmin, sung by the bass baritone Matthew Hargreaves, whose rendition is more comic than tragic and whose projection is slightly wanting at the very bottom of his voice; of the tenor John Porter a very able Pedrillo; and of the Belmonte of Ashley Catling. Cameron Menzies’ direction, on a space of 20 square meters (!) centres on movements choreographed by Lauren Poulton that depict well the different relationships between the characters.

From his piano Bryan Evans, the infallible musical director of this company, conducted the entire show to the end whereupon the audience, completely won over, applauded very warmly.

Article put online on the 18thAugust 2018